Showing posts from February, 2016
Show All

- February 27, 2016
This is based on a true story and tells the story of an against the odds coast guard rescue of a stricken tanker by a tiny boat.

Firstly the bass is tremendous and will please even the hard core bass heads!
Surround works well and the plot is interesting enough to keep the tension going. The pacing is a little uneven, and the love story doesn't add much to it, and takes some steam off the action..
There's decent chemistry between the leads. And I actually like the way they underplayed the tough decisions and heroism, rather than ham it up in a typical Hollywood fashion.

Not a lot of chick factor, and I felt it was superfluous. In fact I felt the lady was a little annoying.
But Chris Pine and Casey Affleck did enough to propel it forward. Ben Foster had an odd ride, not doing too much and just giving us weak smiles as he plodded along as the fellow Coast Guard dude in the boat.
The period clothes and cars felt quite real, and kudos to the wardrobe department.
The more action thi…
Post a Comment
Reactions:
Read more 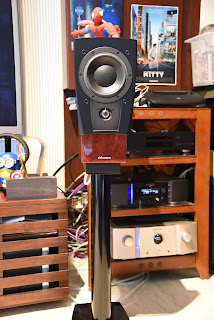 The Confidence by Dynaudio began in 2007 and has garnered multiple positive reviews. The new C1 Platinum is the latest edition, and was launched in 2014 to replace the MK II and the Signature edition.

I had previously reviewed the C1 Signature edition here: http://peteswrite.blogspot.sg/2012/09/dynaudio-confidence-1-and-2-reviews.html

“The Esotar2 with Precision Coating, Neodymium double magnet and absorbing rear chamber provides the perfect platform for the higher frequencies, while the woofer with its MSP cone, light aluminum wire voice coil and Kapton former is also one of Dynaudio’s best. The 1st order cross-over filter consists of select components and follows a special design achieving a sound radiation slightly directed upwards. The C1 has excellent imaging and staging, while sound reflections from the floor will be considerably less than with conventional monitor designs.”

Repairing that piece of HT / Hifi kit: tips and info

- February 21, 2016
Since I had my own fair share of experience, just starting a thread to collate info on repairs:- types of repairs - people who do it- how to go about trouble shooting

When you buy something:NEW:Keep / Scan the receiptThese days, the companies may ask you to fill up an online formIf you don't send it in, the warranty may not work
Second hand:Check that the warranty is transferable or that your seller is willing to send it in for you - usually it's someone you know or is reliable

For second hand items:Do check the history of the items, whether parts are available and for how long.Eg Marant CD players like the CD 63 and it's derivatives have transports that can break down, but parts are relatively easy to find.Likewise for Oppo transports, although it may be harder for the older models.Other items require you to go back to the makers, which can be costly.

What's the difference between a Hollywood production and one from the U.K. ?

For one, production values for one, and certainly there's a whole lot more explosions in a US film. You are also more likely to have big names in it.

However what the bbc and other UK productions bring is a tighter plot, better dialogue and hopefully enough people who prefer a good yarn to just mega sets and bangs.

The premise is simple : an operation to transport a top terrorist goes south and the top agent in charge seems to disappear or go rouge.

The rest of the movie is a chase to stop the terrorist from bombing London and find the mole.

So does it work ? Sans the big bangs bombs and even babes?

Actually it's pretty alright and its gripping enough to occupy two hours of your life.

We have seen an abundance of superhero movies over the past decade, and they have spawned a whole bunch of sequels. Can one more add anything new?

Coming out of a modestly successful Wolverine Origins movie, the character Deadpool did well enough to interest the studios for a spinoff.

We have seen the totally invincible Superman, the brooding Batman and the snarling Wolverine, and now we have the foul mouthed antihero with the power to regenerate - Deadpool.

The studios have tried very hard to make him different and give him a niche. So apart from his super skills, they gave him: a super mouth.

Compared to him Spider-Man is an absolute mute. Not only is he chatty, he is quite fouled mouthed and this plus the bloody fight scenes certainly pushes the movie into the M18 region.

The plot is quite simple and in the two hour plus run time you can expect his origins, a love interest in the form of a very hot Baracchin and plenty of action peppered with snappy dial…
Post a Comment
Reactions:
Read more

- February 11, 2016
Coming after Skyfall, which, in my opinion is one of, if not the best Bond movie, Sam Mendes had a hard act to follow, and does it get it right?
Bond is a delicate balance of action, babes, crazy stunts, and he has been doing this whilst looking totally unflustered with nary a strand of hair out of place. Daniel Craig's Bond changes this, and attempts to put together a more raw Bond, which is more Bourne than traditional Bond. But Sam Mendes is also keen to avoid alienating the traditionalist and there in lies the downfall.
I always admire the impossible stunts, filmed in exotic locations with the most beautiful women in the world. There is a certain misogyny, a certain political incorrectness that just adds spice to the show.
Yet, despite an abundance of all of the above, I guess there is a little fatigue or perhaps it is truly due to the high standards set by Skyfall, that leads to the, well, downfall of this outing.
Bear in mind though, it's still very entertaining fair, a…
Post a Comment
Reactions:
Read more
More posts